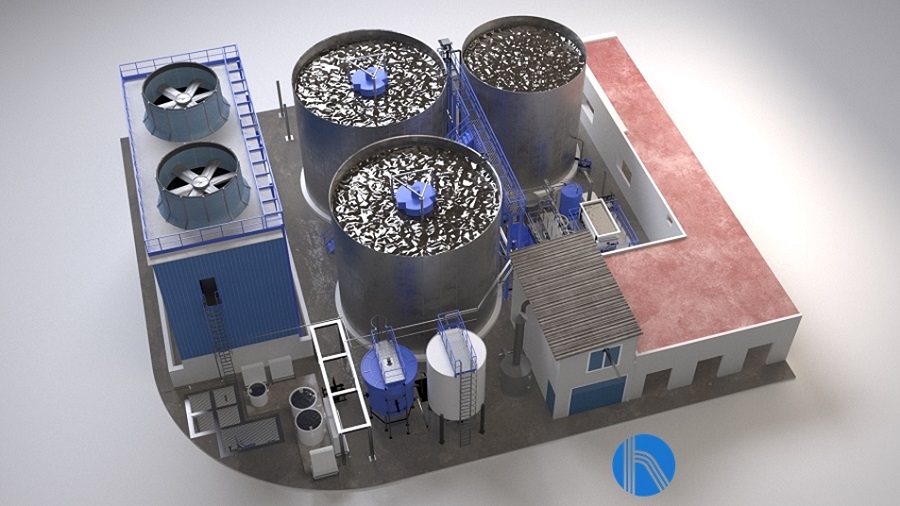 Global solution for wastewater from a biodiesel plant 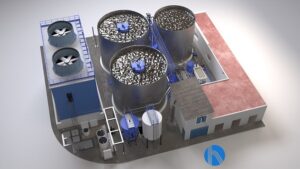 An international biodiesel producing companies has requested the services of J. Huesa Water Technology for the execution of the wastewater treatment plant of the production plant located in Andalusia. Wastewater from the production of biofuels such as biodiesel has a high pollutant load due to the presence of compounds such as glycerine and methanol, among others, which make this effluent potentially polluting for the environment. In this case, there are also several streams that require basic treatment before being discharged into the network from the boiler blowdowns, cooling towers, compressed air installation and raw water decalcification system. Finally, rainwater collected at the facility by the stormwater network will be stored in a storm tank for separate treatment.

Characterisation of the discharge and plant design parameters

For the characterisation of the discharge, we have considered the data provided by the property and the following hypotheses were assumed in order to be able to design the plant:

The design parameters of the plant are summarised below:

The wastewater enters through the rotary screen, which filters the wastewater, so the particles are retained on its surface and are conveyed to the scrapper, which is responsible for separating them and depositing them in a tray for subsequent collection and management. The system is equipped with a homogenisation basin to accumulate the raw water. It´s has sufficient capacity to store the production peaks that may occur. Besides this, it is equipped with an O2 injection system with a triple function:

On the other hand, the water surface pond has a system for collecting the grease that is deposited on the surface for subsequent pumping and degreasing treatment, by injecting air bubbles into the wastewater flow by means of a high-efficiency submersible turbine capable of generating a constant and uniform flow of bubbles. The treated water passes into the degreased water chamber, where it is recirculated to the homogenisation tank by means of an impulsion system; the separated grease will be stored in a tank into which it will fall by gravity from the degreaser for subsequent management. 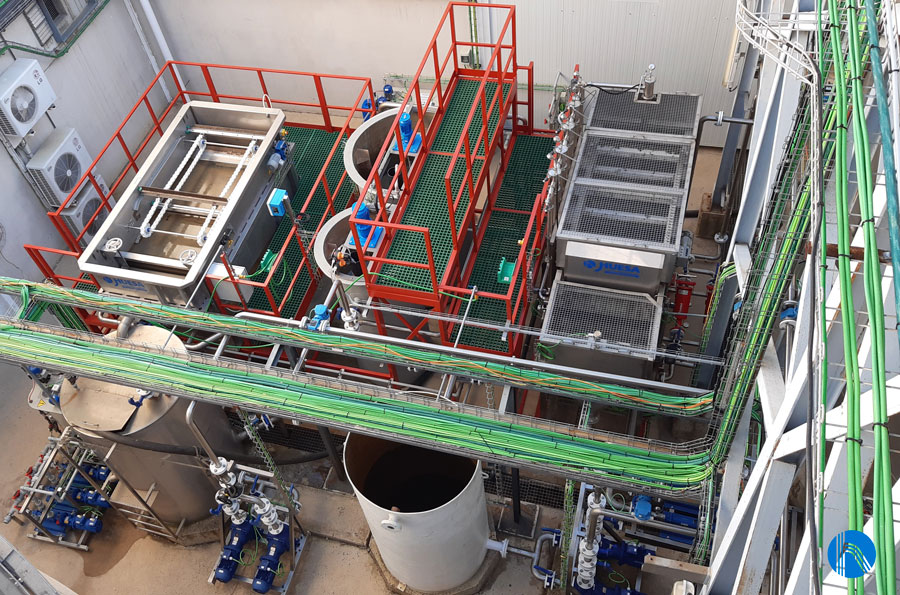 We have decided for a physical-chemical system using dissolved air or DAF, which produces an aggregate with a lower density than water and therefore rises and is collected on the surface. The discharge begins the physicochemical treatment in the Coagulation-Floclation chambers where the particle suspension is destabilises thanks to the pH adjustment and coagulation. This equipment allows better contact between the water to be treated and the reagents and, therefore, better functioning of the physical and chemical processes. Once the water has been chemically conditioned by injecting the appropriate chemicals to facilitate the separation of the solids, the discharge would move to the physical phase of treatment with the flotation system. 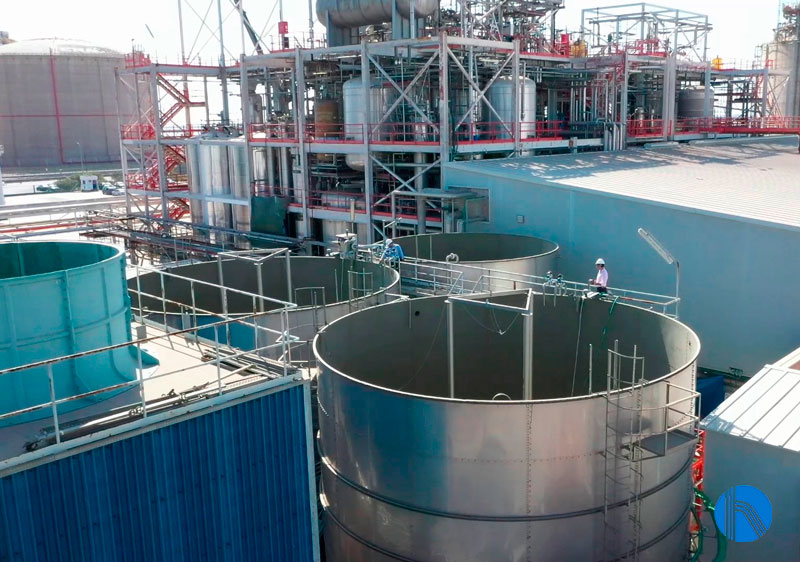 The main objective of biological treatment is the reduction of dissolved organic matter by means of living micro-organisms. In this case activated sludge are used under aerobic conditions. A pair of biological reactors are arranged to work in parallel, so that one or both are operated depending on the flow rate and the load of the waste flow. At the inlet, the effluent is conditioned by different chemical dosages. To be more specific, defoamer to prevent the formation of foam and nutrients for the correct functioning of the microorganisms in the reactors. The reactors are equipped with turbines for the agitation and diffusion of pure oxygen; there is a specific installation for the expansion of O2 before it is introduced into the system. The working conditions are monitored by means of automatic dissolved oxygen analysers in each reactor, thus ensuring the presence of oxygen for the aerobic metabolization of the bacteria. 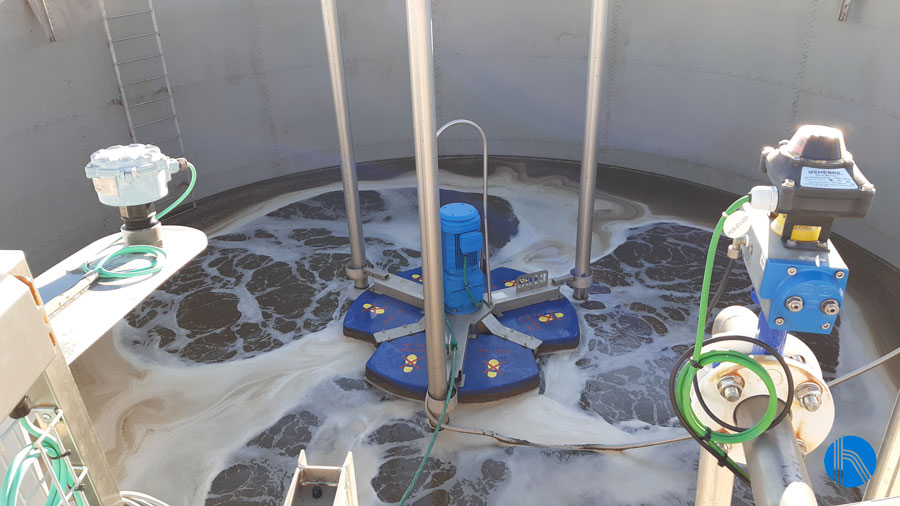 Considering the type of discharge and the casuistry of this industry, the technical department of J. Huesa has opted for a GEM type clarification system. This is one of the most advanced flotation technologies on the market, providing very good performance in the elimination of SS, fats and oils, turbiditu and COD and undissolved BOD5. This system has some advantages over other traditional flotation technologies, reducing the use of chemicals and the use of air as part of the floccules formed. In addition, the GEM system saturates 100% of the dissolved air stream and by leaving the water stream free in the decompression chamber, the air expands causing the flocs to expand very quickly, so the flotation tank is smaller than usual, achieving a greater and more efficient flotation of the pollutants. 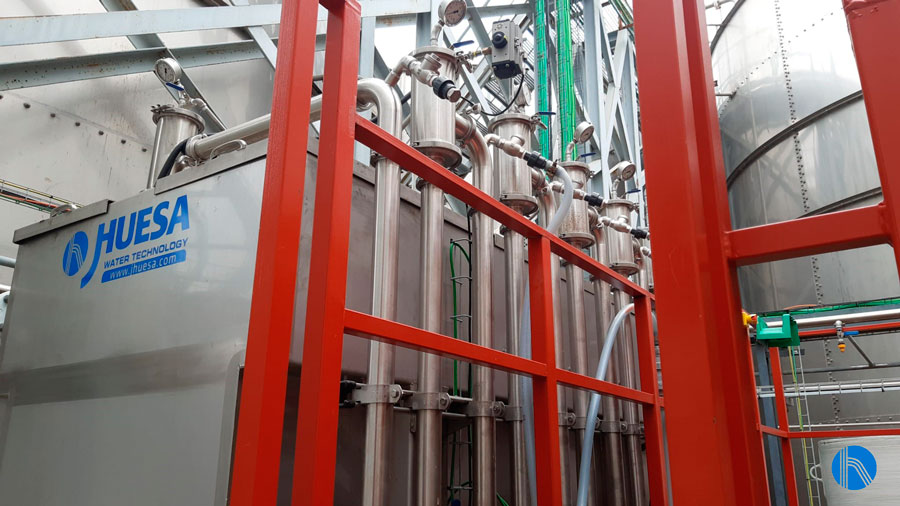 On the other hand, the sludge produced will be drier than with other flotation technologies due to the expulsion of part of the water contained within the floc that occurs when the inner bubbles start to grow. This sludge will be taken to a storage tank with a purge valve to remove the free water. The dryness of the sludge at the outlet of the GEM System will be around 7 – 8% and can reach dryness of more than 15% at rest. This allows a significant reduction in both sludge handling and operational costs.

The sludge produced in the different processes of the plant (pre-treatment and clarification of the mixed liquor) have a high moisture content, so its water content must be reduced to minimise the total volume to be managed. 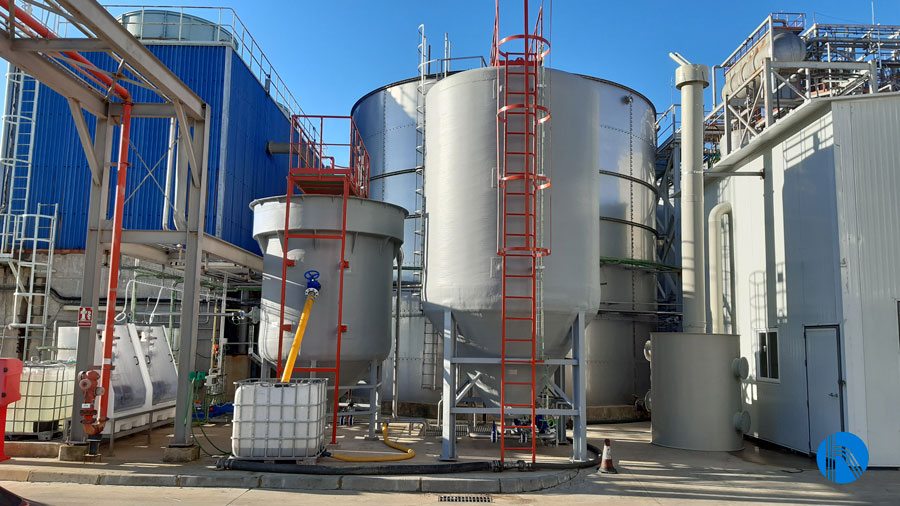 Firstly, the sludge is stored in a thickener that acts as an accumulator for the subsequent stage. This tank has an agitator that prevents thickening and agglomeration of the sludge in the lower part, which would cause clogging and dead zones in the tank. The accumulated sludge is pumped through a screw pump (specially designed for this type of application with viscous and fouling fluids) to the centrifugal thickener at a constant flow rate. Prior to entering this equipment, the sludge is dosed by a polyelectrolyte to encourage the formation of particle aggregates that are more easily separable. The clarified water from this equipment is collected in a pit from where it is taken back to the head of the process, to be treated with the rest of the plant discharge.

This website uses cookies to improve your experience while you navigate through the website. Out of these, the cookies that are categorized as necessary are stored on your browser as they are essential for the working of basic functionalities of the website. We also use third-party cookies that help us analyze and understand how you use this website. These cookies will be stored in your browser only with your consent. You also have the option to opt-out of these cookies. But opting out of some of these cookies may affect your browsing experience.
GUARDAR E ACEITAR