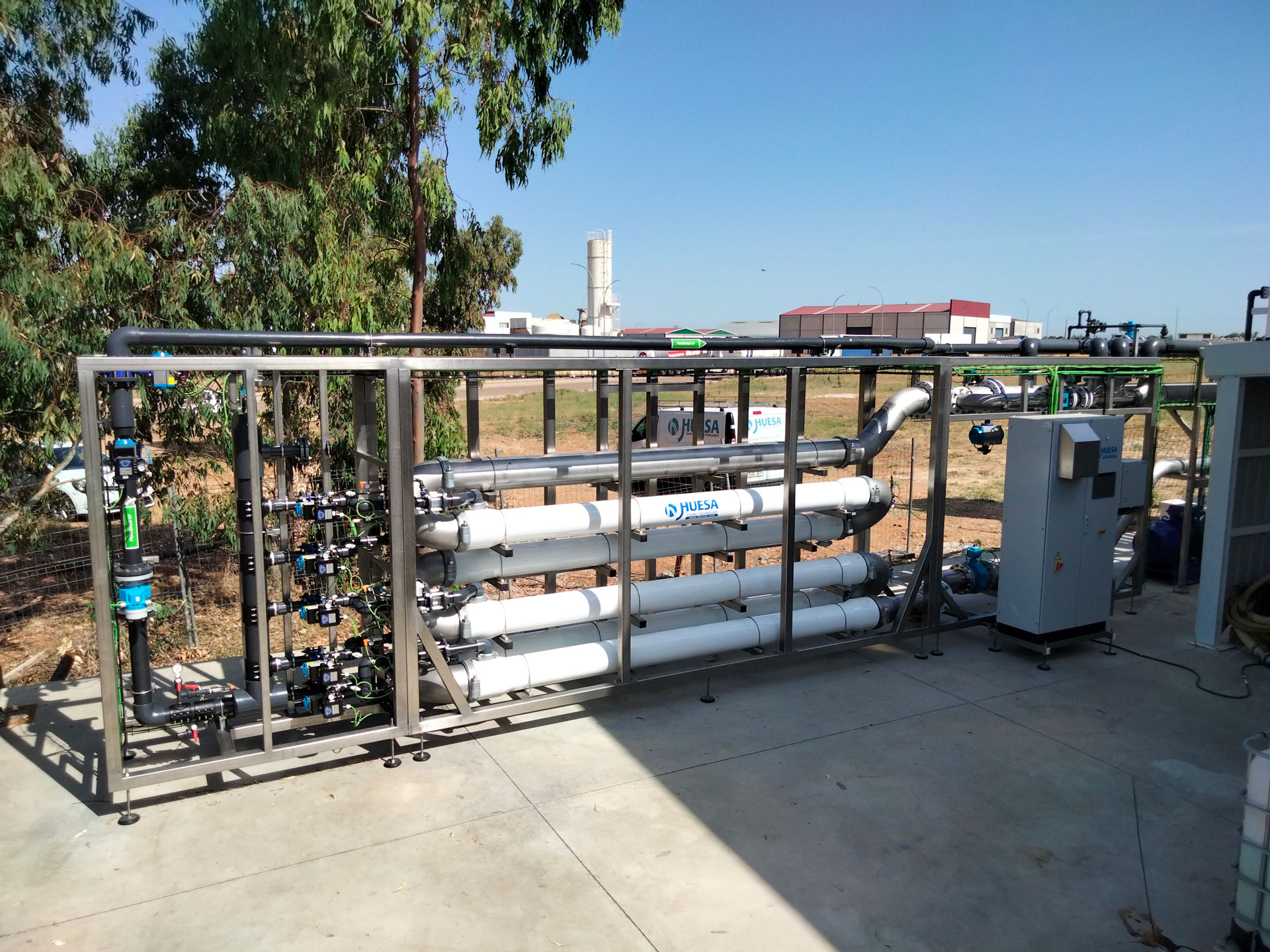 Wastewater treatment from the production of cleaning and detergency products

On this occasion, a leading company in the production of cleaning products, detergents, capsules, and personal hygiene products has entrusted the services of J. Huesa for the treatment of effluents from production, specifically to complete the existing purification system in the factory.

To go more in depth in this sense, we will now give a background of the starting situation, since the mainstream presented high COD, A&G and SS contents that negatively affected the O&M of the existing treatment line.

To respond to this problem and taking into account that this sector has increasingly demanding requirements, the technical team proposed the installation of a pre-treatment system consisting of a tubular ultrafiltration capable of eliminating practically all the AG and SS, while at the same time significantly reducing the COD load entering the existing treatment line. To corroborate the suitability of this solution, in an initial stage of the project, a pilot test was carried out in the laboratory of J. Huesa. 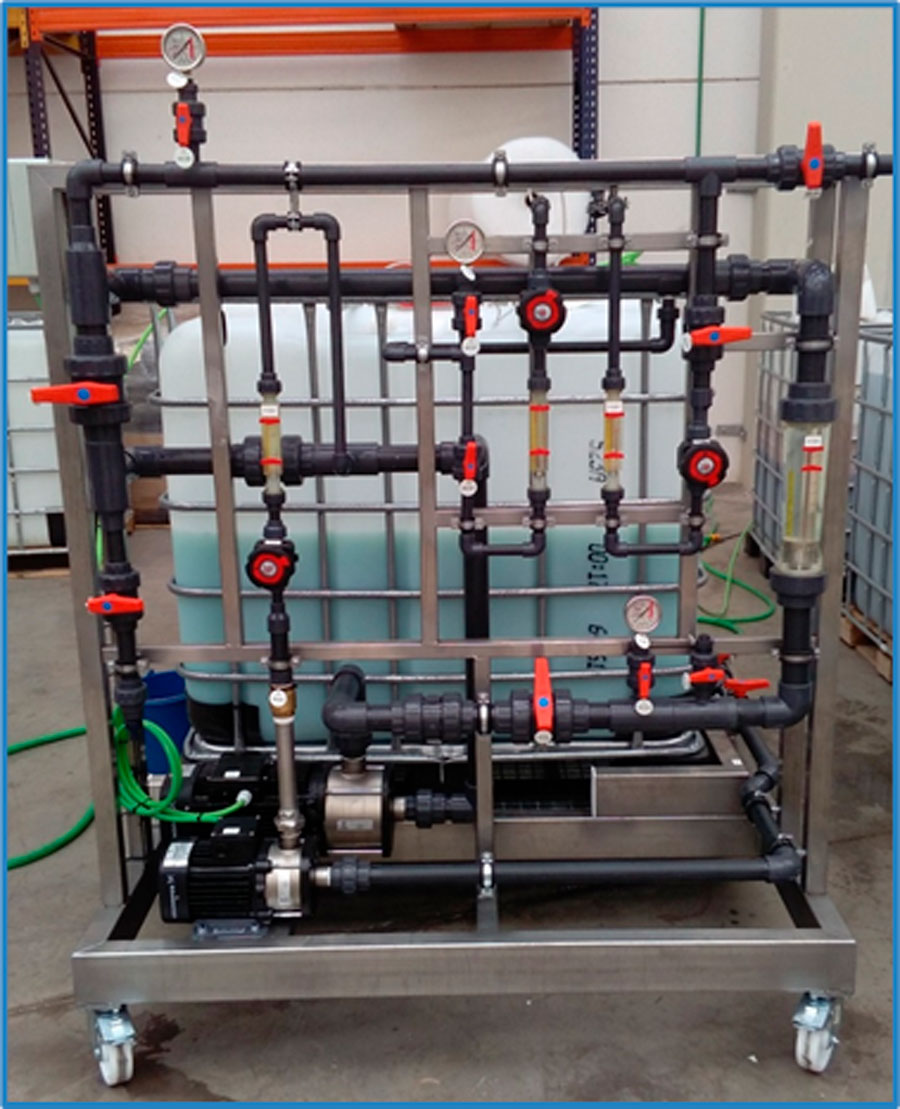 This pilot project was carried out in two phases, initially several ultrafiltration membrane  modules were tested to choose the appropriate model to be included in the final plant. For this purpose, different modules were tested at a crossflow velocity of 4m/s, until concentration values of maximum 16.7 at the design flux suitable for an industrial solution were reached.

From this factor, the flux decrease dropped drastically, and abundant foam formation occurred, affecting the recirculation of the system. In addition, the almost total elimination of SS and A&G and a drastic reduction of COD in the ultrafiltered water obtained were verified.

In a second stage, a pilot unit was manufactured with a MO P1 (1,2 mm) 66.03 PVDF 18, consisting of an IBC for concentration pond and a 200-litre treated water tank, in order to verify the behaviour of the solution in a plant similar to the industrial solution, as well as to evaluate the performance over a longer period of time than in the initial test.

The objectives set for this plant were as follows:

Since the customer’s raw water contains water from different streams in the proportions normally used in the production process, a specific analysis of the permeate quality was carried out for each of the streams individually, with the same objectives as in the previous case.

Once the pilot plant was set up, the piloting was carried out in three different phases:

The conclusions obtained in both cases are detailed below:

As a conclusion of the pilot study carried out, it was decided to implement an ultrafiltration system, which is a membrane separation system under controlled pressure that generates a permeate free of SS, bacteria, and viruses.

As a brief presentation of this technology, it can be said that there are two types of membrane modules: Dead-end and crossflow. The latter can be either an inside-out or an outside-in system.

Due to the conditions of the process and the water to be treated, as well as being the only system that guarantees control of fouling and clogging of the membranes, the type of UF to be used will be an inside-out crossflow system with a capacity to produce 15 m3/hour of permeate. 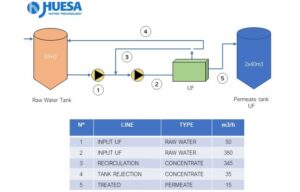 All the system’s operation is controlled from the electrical panel, where the automaton that governs the installation is located, as well as the touch screen on which the different operating variables are displayed and parameterised.

The water to be treated is stored in a 30 m3 capacity truncated cone-shaped GRP tank from which the water is pumped by means of a 50 m3 /hour capacity pump. A battery of two self-cleaning ring filters will be placed on the impulsion line itself, prior to the tank inlet, which have the capacity to retain the larger particles that may come with the raw water. 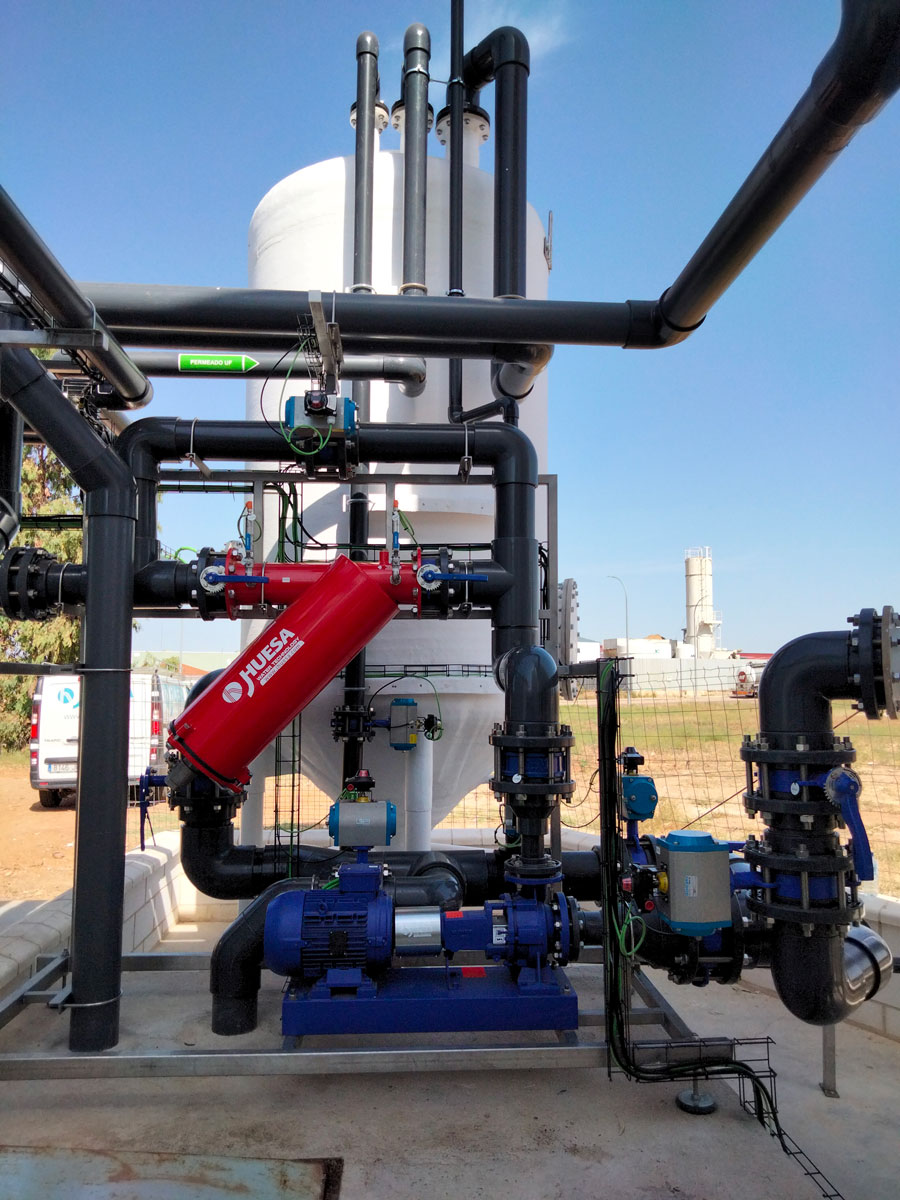 The pumped water passes through a mesh filter with a pore size of 150 microns. This is followed by the 90-kW recirculation pump. This pump supplies the water to be treated to the ultrafiltration modules.

This pump moves both the water driven by the feed pump and the ultrafiltration concentrate recirculation itself, with a flow rate of up to 400 m3/h 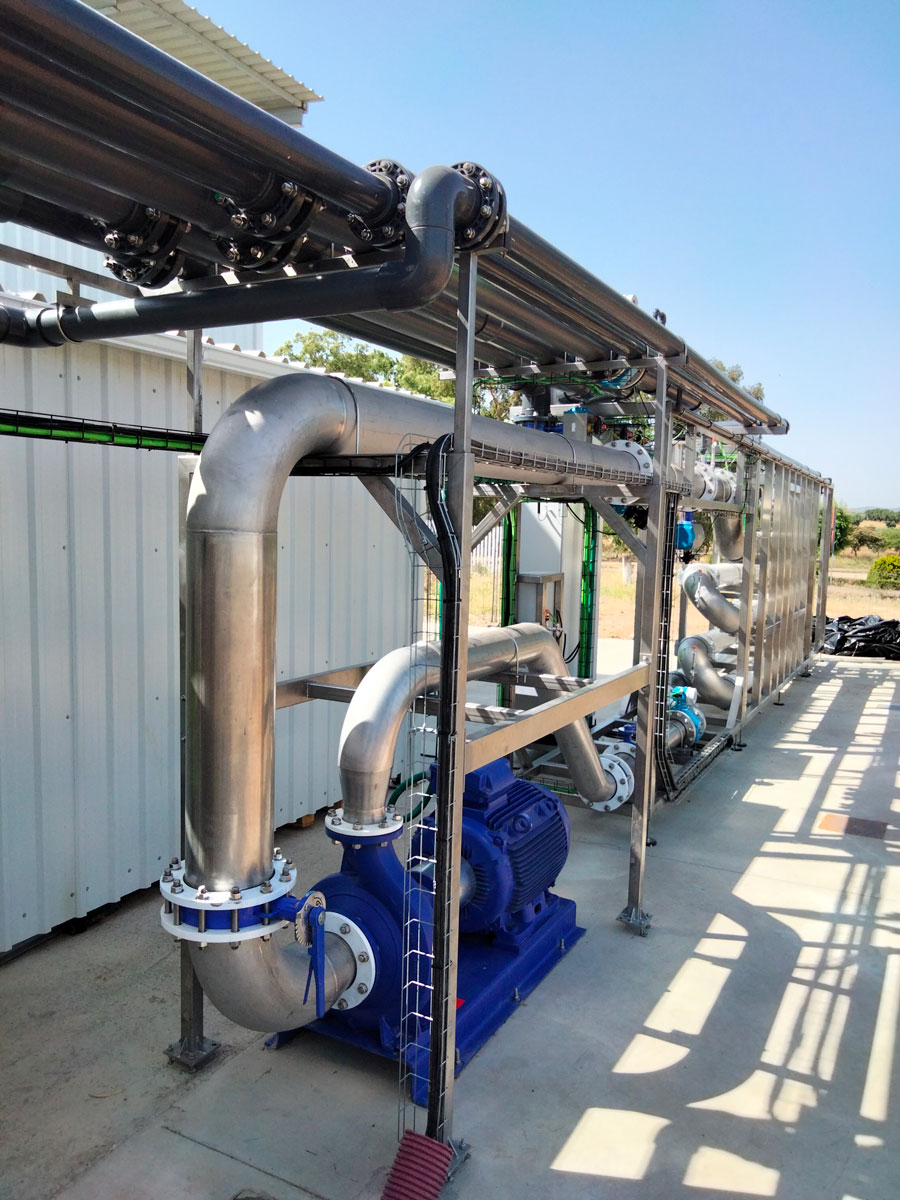 Detail of the impulsion pump

The ultrafiltration plant has 5 modules composed of PVDF membranes with a pore size of 30 nm.  The dimensions of each module are 4 m and 10″ in diameter. In addition, after the 5 modules, the plant has a 10″ stainless steel pipe which serves as a reserve for possible expansion of the plant. This pipe is known as a « dummy ». 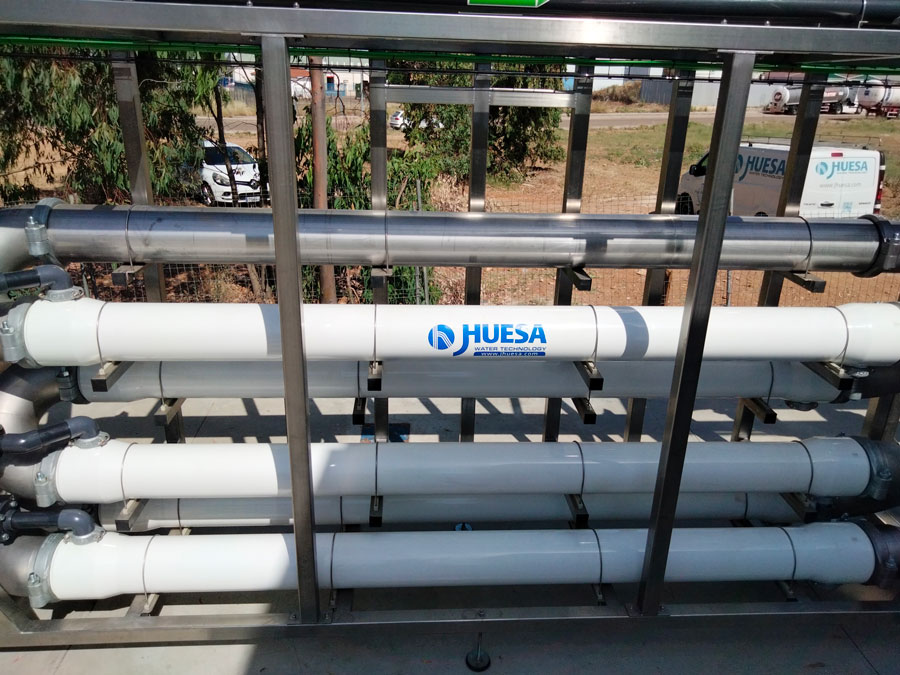 In the inlet line to the UF skid, as well as at the outlet of each module, we find a series of analytical instrumentation with the aim of always parameterising the conditions of the plant, specifically:

After the ultrafiltration modules, the concentrate returns through a 10″ stainless steel line to the suction of the recirculation pump. 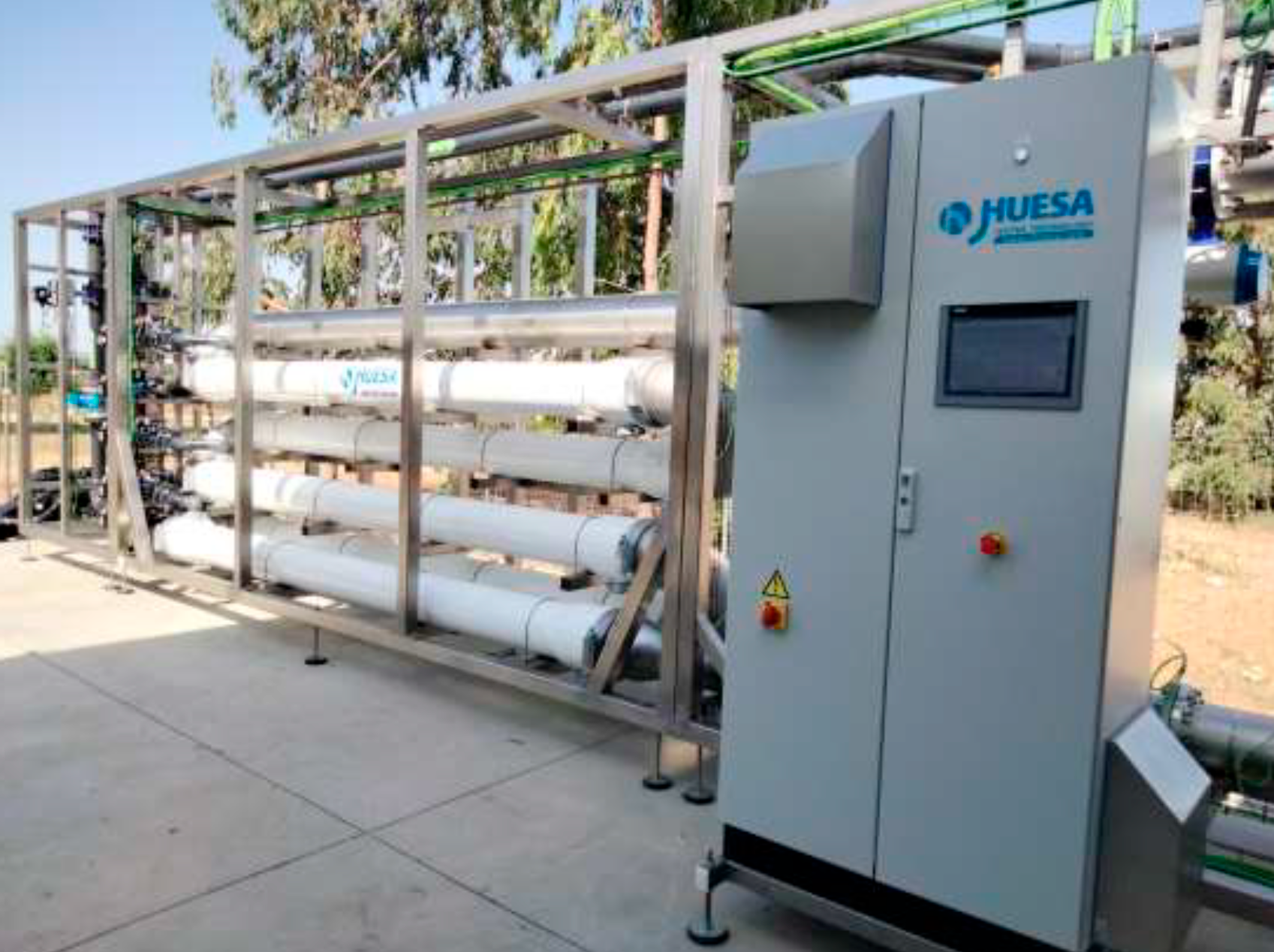 In a UF plant it is necessary to move the main discharge from the membranes once the process is stopped. In this way, we ensure that the membranes are « soaked » with clean liquid, such as osmosis water, mains water, or even the plant’s own permeate. On this occasion, after several pilot studies in the laboratory, it was decided to use the UF’s own permeate water as flushing water.

To be able to flush the plant when it is shut down, a 5 m3 truncated cone-shaped GRP tank has been included in the system, from which the feed pump sucks in ultrafiltered water and introduces it into the plant. The rest of the permeate is collected in two 40 m3 GRP tanks that collect the inlet water from the factory’s existing treatment line.

The chemical cleaning or CIP mode is a mode that comes into play when the performance of the membrane has decreased due to fouling. In order to know this drop in performance, it is important to monitor the following parameters:

This website uses cookies to improve your experience while you navigate through the website. Out of these, the cookies that are categorized as necessary are stored on your browser as they are essential for the working of basic functionalities of the website. We also use third-party cookies that help us analyze and understand how you use this website. These cookies will be stored in your browser only with your consent. You also have the option to opt-out of these cookies. But opting out of some of these cookies may affect your browsing experience.
Enregistrer & appliquer