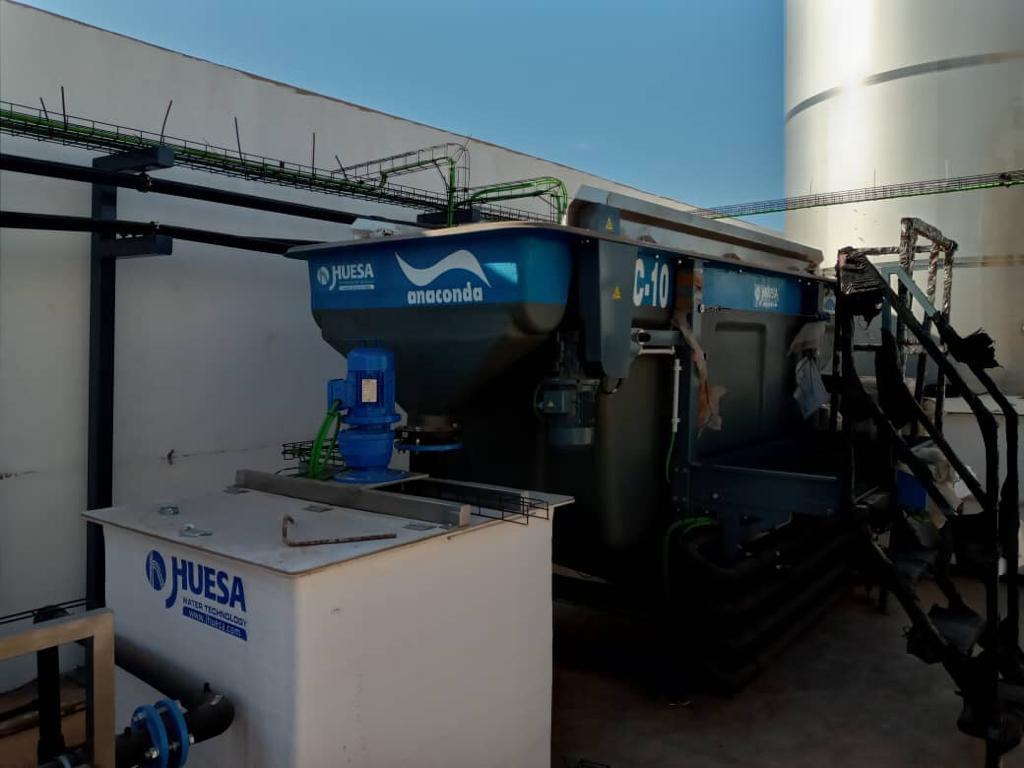 A leading multinational company in the production of fishmeal needed to solve the wastewater treatment of its production centre located on the west coast of North Africa, which is why it contacted J. Huesa Water Technology.

On this occasion, J. Huesa executed a turnkey project consisting of the study, design, customised manufacture, installation, and commissioning of an effluent treatment plant to ensure the global elimination of pollutants from the water prior to its discharge.

The wastewater from the production process is collected in a well, equipped with an analogue level that controls the starting and stopping of the pumps, which convey the water to a rotating screen. This device allows the removal of coarse solids that may interfere with subsequent treatments. The solid particles are retained on its surface and from there they pass to the scraper which separates them and deposits them in a tray.

The water leaving the rotary sieve is collected in a homogenisation tank, where possible fluctuations in the characteristics of the wastewater are minimised, reducing the consumption of chemical products necessary for its neutralisation. From here the water is pumped to the DAF by means of a centrifugal pump equipped with a frequency converter, so that it will always supply the necessary flow, adapting to the existing demand by regulating the speed of the pump, with the consequent energy savings.

At this stage, the discharge undergoes the different stages of physico-chemical treatment:

The coagulation-flocculation process will take place in the flocculation tube, separate from the flotation process. During coagulation, the colloids present in the homogenised water are destabilised by the addition of a coagulant (electrolyte), resulting in colloids that are more visible to the naked eye.

Once the colloids have been produced, a chemical product called flocculant (polyelectrolyte) is added to the water, whose main function is to promote the aggregation of the individual particles or colloids formed during coagulation. In this way, larger solids are produced, which favours their flotation, which is the last stage of the physical-chemical treatment. 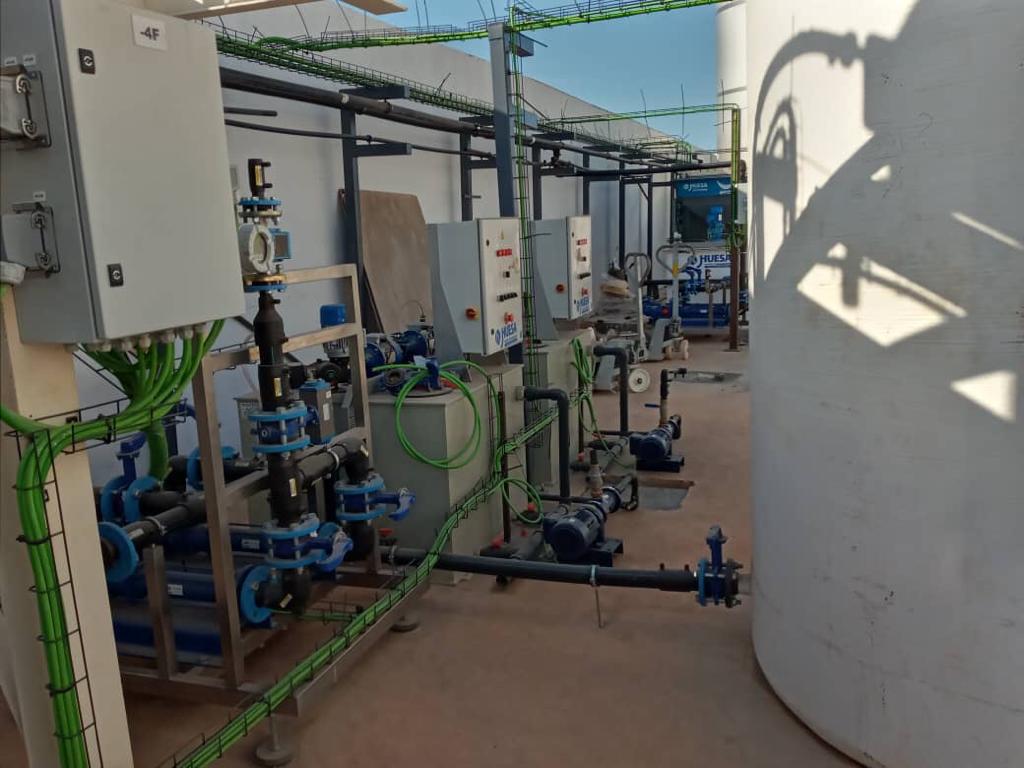 The artificial attachment of the micro air bubbles to the solid particles takes place in the float. This gives them a very high particle-gas rise rate. The result is a rapid removal of the solids load. The air and particulate agglomerates rise to the surface of the float where continuous dewatering takes place, before being discharged by the surface scraper into the sludge accumulation tank. The heavy particles remain in the settling compartment at the bottom of the float, where they will be purged.

The treated water falls directly into another tank fitted with two digital levels (maximum and minimum) to control two pumps that will convey the water to a further stage of the treatment process. 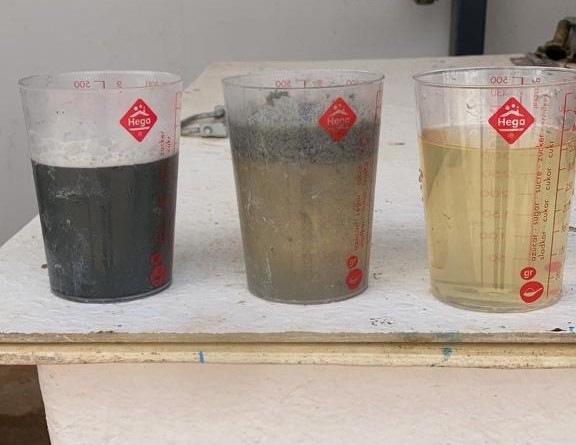 The sludge accumulated in the sludge storage tank at the plant is pumped by a pump fitted with a frequency converter to the sludge thickener tank. Sludge storage eliminates fluctuations in sludge production and allows sludge to accumulate over periods of time, thereby reducing chemical consumption and improving the performance of the dewatering equipment.

During thickening, the solids content of the sludge is increased by removing part of the liquid fraction of the sludge. In the gravity thickener at the plant, the thickened sludge is extracted from the bottom of the tank by a single pump equipped with a frequency converter and passed to the centrifuge for dewatering (it is first chemically conditioned to reduce the moisture content by increasing the centrifuge. 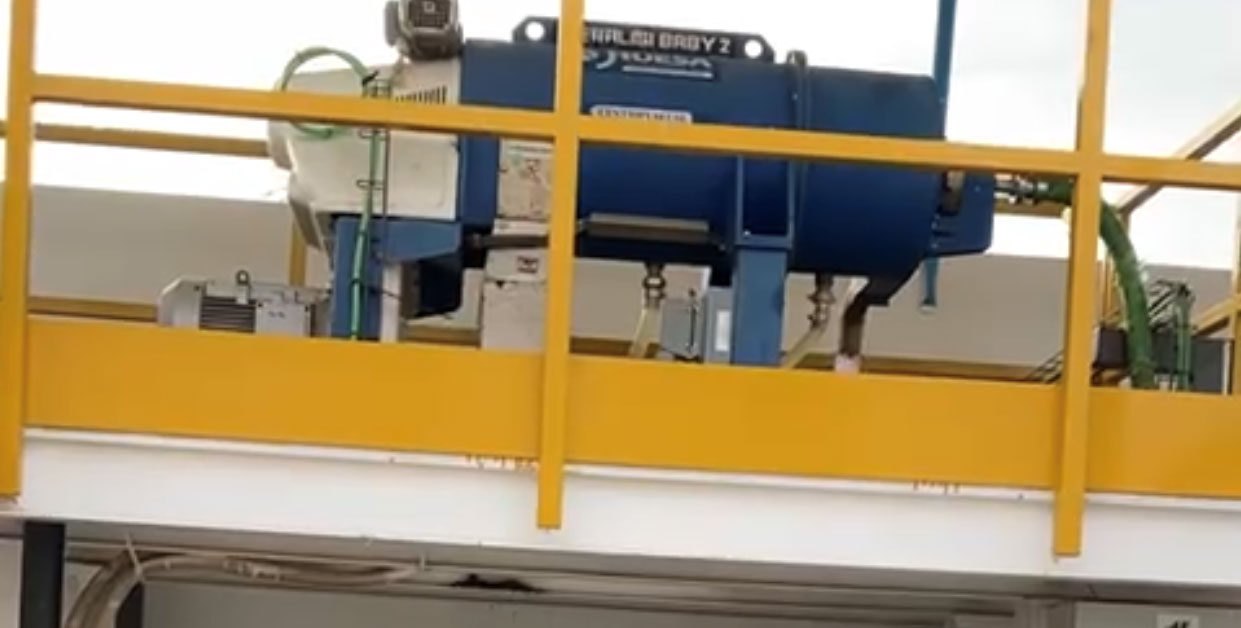 Finally, the dewatered sludge is transported via a screw conveyor to the sludge collection tank. 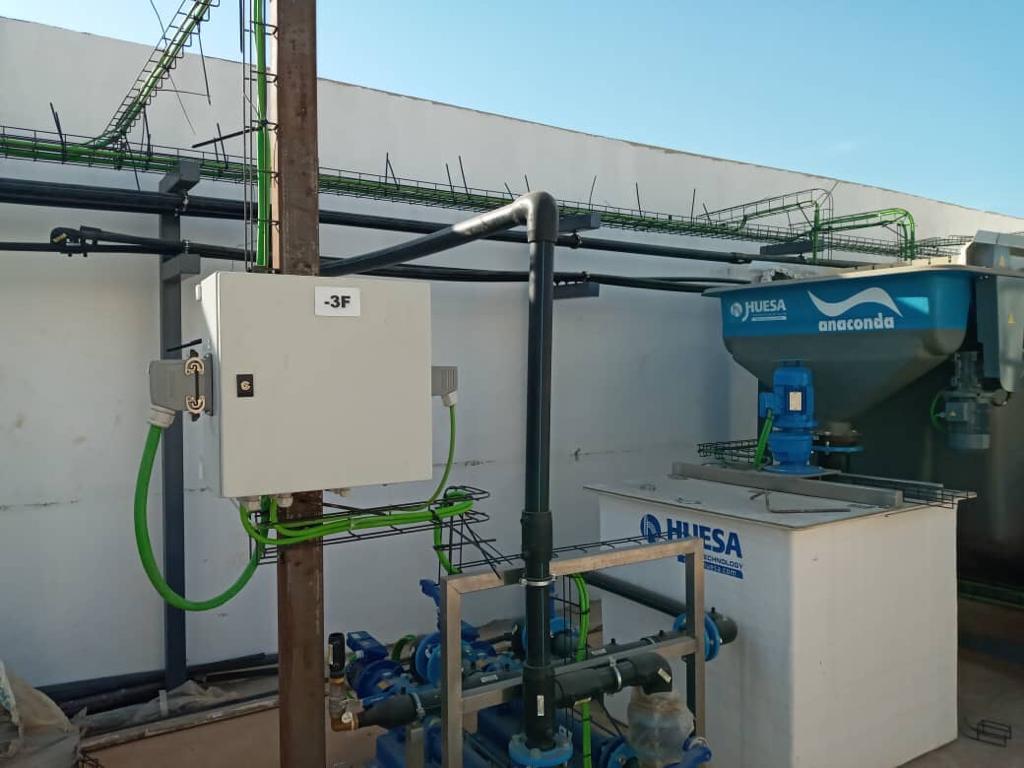 Sludge tank at the outlet of the DAF

The Effluent Treatment Plant is equipped with all the necessary automation and control instruments, so that its operation is controlled from the central electrical panel containing the automaton and the touch screen, which facilitates the automation of the installation.

With this reference, J. Huesa adds a new project for wastewater treatment in the agri-food sector at international level.

This website uses cookies to improve your experience while you navigate through the website. Out of these, the cookies that are categorized as necessary are stored on your browser as they are essential for the working of basic functionalities of the website. We also use third-party cookies that help us analyze and understand how you use this website. These cookies will be stored in your browser only with your consent. You also have the option to opt-out of these cookies. But opting out of some of these cookies may affect your browsing experience.
Enregistrer & appliquer